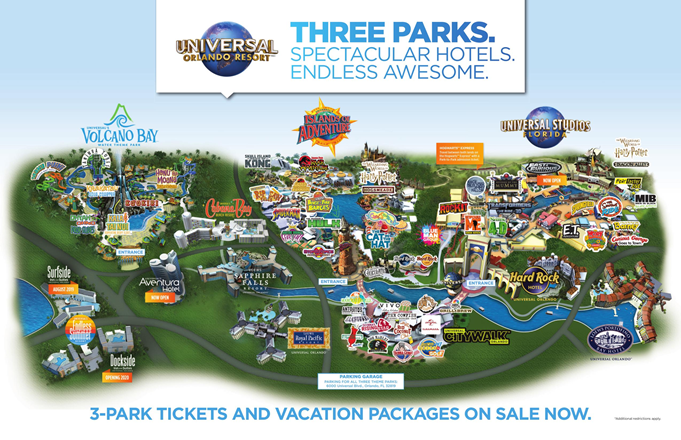 Hang on tight. Your heroes are about to burst through the screen and yank you into the story. You’re the star here and you’ll disappear into one jaw-dropping adventure after another. Dodge evil villains. Defend the earth. Face a fire-breathing dragon. Wander into animated worlds where characters you love are suddenly right beside you. Go beyond the screen, behind the scenes and jump into the action of your favorite films at the world’s premier movie and TV based theme park.

Prepare for a place where super heroes, beasts, and magical creatures stand before you. You're entering lands where everything is real. Explore a secret school of witchcraft and wizardry. Fly high above the city streets with a famous web slinger. Hide from hungry dinosaurs and hope you're not their next meal. And you can face the most colossal ape ever to walk the earth. Let the adventures begin.

At this water theme park, thrills and relaxation flow in perfect harmony. And right now, the palm trees are still swaying, the Florida sun is shining, and the crowds are lighter. It’s the perfect place to step back into summer. Here, the TapuTapu™ wearable lets you hold your place in the ride lines and reveal wondrous surprises with just a wave of your wrist.

Sample Vacationwiser.com adult prices (includes all taxes, plus Vacationwiser finance charges and service fees). Children 3-9 are approximately 4-5% cheaper.  There is no charge for children under 3.

Guests can skip the regular lines with a Universal Express Unlimited™ Pass at many of their favorite rides and attractions at Universal Studios Florida™ and Universal's Islands of Adventure™ theme parks, allowing them UNLIMITED ride access at participating rides and attractions each day that their pass is valid.  This is available for purchase as a 3-Park, 2-Park or 1-Park enhancement. Prices vary by travel dates.

With a Universal Orlando Resort™ VIP Experience, you will be personally escorted by a Universal Orlando™ expert on a guided tour throughout Universal Studios Florida™ or Universal's Islands of Adventure™! By the end of your tour they'll feel like an A-list celebrity!  Vacationwiser prices start at $325 per person for non-private tours.

With My Universal Photos, just let our professional photographers capture your best moments perfectly. Guests will have pictures on some of our most popular rides and attractions that you can't get any other way, and you'll enjoy the parks without a single blurry memory. Plus, digital downloads make things easy to be able to view and share your favorite memories.

Winter in the Florida The...

Give the Gift of Travel